I don’t know if I actually AM the world’s worst bowler — but if I don’t hold some kind of record I’d be surprised. 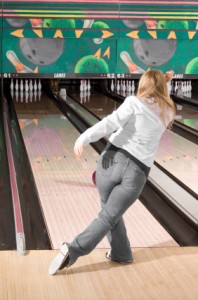 Keep your eye on the pins. . . Photo by Lokibaho

They say there’s a sport for everyone.  Clearly mine isn’t bowling.  I’m not sure when I was doing it if I even liked it that much.  Or maybe that’s just a sore loser talking 🙂

Here’s the thing.  There are sports where I excel (or I did when I was younger.)  I made varsity on the girls’ basketball team (which in my state was a big deal.)  Same with track.  I played softball reasonably well and usually fielded most games. I was a killer spiker at volleyball.

I tried.  I tried everything.  I even had an old guy come up and try to give me pointers, but he wisely left after I released my bowling ball backwards into his lap by mistake, instead of pitching it forward as he was trying to show me how to do.

I’m hopeless I tell you!  Good thing there were other sports to play.

Hey, can anyone beat that score of 17 straight gutter games?  I’d kind of like to know.  It won’t make me feel so bad if I’m not the worst.