Another winter, another chance to shovel snow.  The past few winters we’ve been fortunate, because a)  the snowfall hasn’t been too bad and b) we were blessed to have the Snow Angels in our community.

I blogged about that several times; here’s the last post I wrote about it.. 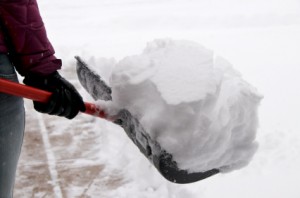 2011 snowfall has been heavy already

This winter, the Snow Angels are off to college.  We got lucky that they were all home for winter break when the snow arrived; and just like clockwork, they called to ask if we would like them to help again.  Of course we did!

We had a discussion with them about what will happen if it snows while they are back in classes.  I suggested that they might want to pay it forward a little bit, and train the next group of kids, so the project could continue.  They thought my idea was pretty good, so. . . before the next snowfall they had already contacted the local high school to get other kids interested in taking up where they left off.  I’m not sure where it stands as of this blog post, but these guys are very proactive.  I can just imagine we’ll be getting a call during the next snowstorm from a whole new crew 🙂

Not only are these kids organized, they are really into paying it forward.  I made a point to stay in touch with them, because if ever there is anything I can do to help advance their careers, I will do it.  In fact, I shared with them an idea about how they could turn their concept into a product. . . if they want to do that.  We’ll see.  I wouldn’t be surprised if they do.  I’d be delighted to do a little paying-forward with them myself 🙂

Contributing what you can is contagious.  I highly recommend it.

What kinds of experiences have you had, with outstanding young people in YOUR community?  I’m telling you, there are some very smart and heart-based kids coming along.  Gives me hope for the future.  When I see it, I salute them and let them know how much it’s appreciated.  I let them know that they matter.  They are seen and heard.

How about you?  How are you supporting the next generation to be really awesome?  The future leaders are not always hiding or waiting for a shout-out; they are busy doing good stuff.  It’s nice to let them know we care about that.  What do you think?