This Monday I had the unique experience to transport a dog that had been rescued from a large puppy mill busted in the South. There were hundreds of dogs that were rescued — too many to all go to the same place.  They went to several large metropolitan area shelters, for further transport to various breed rescue groups.  That’s where I and my partner came in to the picture.

Our first stop was the Manhattan ASPCA, a facility that turned out to be so impressive I wanted to visit again under different circumstances.  The place was super-secure, and super clean.  The first thing I noticed when we arrived was the smell — of clean air and freshly scrubbed floors.  The staff has state-of-the-art computers and equipment.  The animals are kept in glass-enclosed areas large enough for them to move around, and to see one another but with noise-muted safety.  The floors were clean enough to eat off — something that was unexpected considering the number of animals they have to house, feed, and clean.

We met our little rescue dog, who was very timid (as expected) and in pretty good condition, considering she had lived her entire life without much attention to her grooming or other health needs.  She had been spayed and had had a tooth pulled (at only two years old!), her nails had been trimmed, and she’d been bathed.

We were also impressed with how the staff person approached the rescued dog, slowly crouching down beside it while talking in a soft, low voice, never looking in its eyes, and slowly putting a fabric lead around its head and drawing it tight enough so that the dog couldn’t bolt if it spooked.  The staff person also fastened a leather lead to its collar, which gave a double secure way to maintain control in case she needed to prevent it from suddenly trying to escape out of fear.  It seemed to be a very kind and gentle way to deal with such a timid little dog; the workers at the ASPCA know just what to do in these cases, and they do their job very well.

The behavioral specialist told us that she is an escape risk, because she is not at all used to anything other than a cage or crate.  We took the advice seriously and passed it along to her foster care person when we arrived.  She rode quietly in a crate in our Outback for more than two hours, without so much as a whimper.  She was so quiet we almost wondered if she was still there!  We never heard a peep.

Once we got to our transfer point (where we’d agreed to meet the person who would be taking her home to foster her until a permanent home could be found) I offered a bottle of my Puppy Mill Flower Essence formula.  Animals that have been kept captive in puppy or kitty mills have never been socialized; they do not know the ordinary sounds of a human household, nor have they been handled except roughly.  They have not known the sounds or love of a family that cares about them, not have they had a chance to learn to play by themselves or with other animals.  Their only experiences with humans has been, often, abusive or neglectful. 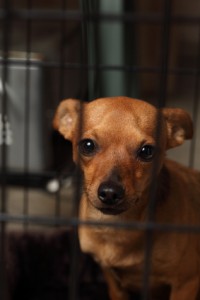 Dog in Cage, photo by Kameleon007

Once rescued, careful and slow attention must be paid to all their needs.  With time, kindness, and gentle training, these rescued puppy mill animals can eventually become part of a human household and live a long, good life.  But their needs are enormous.  Thankfully we have people who care enough — and will invest that time — for an animal that can offer them nothing back but gratitude and love.  This little dog is going to have a new start in life.  In a way, her journey is just beginning.   May it be happy and safe from here on out.  (By the way, this isn’t the dog we rescued — just an image of a dog in a cage from several years ago. . . in case you were wondering.)