When Pets Get Sick

If you have pets, you probably either take them for granted — or even sometimes begrudge the demands they make on your for feeding, grooming, vet care, and — if it’s a dog — the exercise (never mind that the exercise helps keep YOU fit. . . )

But when your pet gets sick?  That’s when you come face to face with why you have the pet in the first place:  because you love them.  And they give back to you much more than you could ever give to them.  That’s what’s been going on at our house the past week. 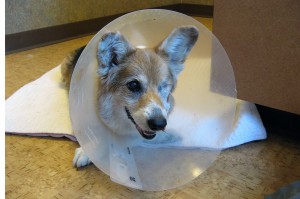 Our Pembroke Welsh Corgi had to undergo surgery to remove a questionable abdominal mass. The past few years, she’s had a number of health challenges, and we were more than a little concerned about how this would go.  She’s had 3 rounds of Lyme (the last one several years ago took a toll on her ligaments and cartilage, so that she is halfway crippled in her front legs.  She still manages to get around fairly well despite it, though.

But she also developed an esophogeal problem, with a chronic cough and occasional choking on her food (or treats.)  This was what worried us the most, because last year when she was in for an unexpected emergency surgery (staph infection on her skin) she developed aspiration pneumonia and had to be in ICU for 5 days.  While we were concerned about the mass, we were more worried about the risk of another pneumonia.

And wouldn’t you know?  That’s what happened, even though she was in one of the top veterinary hospitals on the East Coast, with staff who were alert and doing everything they could to prevent it.  They think she aspirated her own saliva, because she didn’t have any fluids, and nothing could have gotten into her lungs besides that.  Of course, her system was stressed with the anesthesia and operation, but it was the pneumonia that really got her into trouble.

We spent the past week visiting her in the ICU unit, sending distance reiki and giving her reiki treatments when we were there, and consulting with the staff about how to get her healthy again.  The first few days were pretty rough.  She was one pitiful little pup!  Slowly she began to gain traction on recovery, though, and by the 4th day she had obviously turned the corner — she was hungry and smiling!

We gave her some ETS flower essences (Emergency Trauma Solution) to help her electrical system cope with the traumas of both the surgery and the pneumonia, as well as the strange experience of being in ICU for so many days.  And when we got her home, we gave her the Recovery Formula to help her get back on her feet again.  They really help!

You know, the house can get pretty empty when the furry person isn’t around to cause trouble — or keep you company.  And you don’t know how much they mean to you until that emptiness fills up so much space there isn’t room for anything else.

If you have pets, hug them and tell them how much you love them.  Take time to appreciate the short time you will have with them; they have shorter lives than we do.  And in your own heart, open a place big enough for the space that will be left when they leave.  It’s bigger than you think!