What To Do With All That “Lost Oil”?

The still-unfolding drama playing out in the Gulf of Mexico with the oil spill is horrifying.  And that’s an understatement. But beyond pointing fingers and looking for someone to blame, what I want to know is why can’t we get it under control? That’s an unimaginable loss of oil — and an equally unimaginable disaster for the people and creatures in the Gulf.

And if oil is in such short supply (as some suggest it is) — then instead of trying to wring every last drop out of the earth, why don’t we find new, renewable sources for fuel?  All that oil pumping into the Gulf is just basically lost — and polluting the heck out of the waters and shoreline. Why can’t we stop it?  Why can’t we get it back and use it? 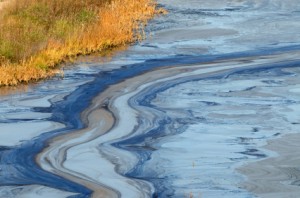 Can't we take it back? Photo by mikadx

We have the technological know-how to walk on the moon and send robotic devices to Mars.  We probably have people somewhere on the planet who understand what to do about this situation, that won’t make it worse than it already is.  At the moment, I and about umpty-million people are getting tired of watching teams of ineffective oilmen fail again and again to stop the oil leak or its destructive spread throughout the gulf and coastal waters; we’re getting tired of all the politicians who are doing more talking than solving.

As I see it (and by no account am I either a politician or a scientist. . . ) there are at least 3 ways to solve this problem.  While these suggestions are partly tongue-in-cheek, they are meant to provoke thought.

1)  Eat it. I heard that there are enzymes that actually “eat” oil molecules.  I have no idea whether the byproducts are harmful — but is anyone even considering this?  Nothing could be more harmful than the toxins that have already been put into the water. (See this NY TImes article on the recently revealed ingredients in the dispersants that were liberally applied to try to keep the oil from reaching the surface — in vain.)

2)  Move it/suck it up. It might take a bunch of giant vacuums but couldn’t they “suck up” the oil plumes when they find it, and load it onto transport vessels to be processed on shore somewhere?  Anything to get it out of the water. The sooner the better.

3) Collect it. They have seines to catch fish.  Those aren’t being used right now.  Maybe they never will again, thanks to the lethal properties of the oil and other things the spill has put into the waters of the Gulf.  How about using the nets (or modified ones)  to gather up the oil, and haul it up onto tankers to be processed?

Items #2 and #3 would have the added benefit of removing the offending substances from the waters (probably too late for most of the marine life affected, however. . . ) — AND employing people who are growing frustrated and bitter sitting on their hands waiting for something better to happen than is.  Yes, provided that they COULD retrieve some of the oil from the gulf waters, they would then have to find new ways to process it — because it would contain a lot of things that aren’t usually found coming out of oil wells.

I read this past weekend that the actor Kevin Costner has invested 15 years and several million of his own funds to create a centrifugal processing device that will separate oil from water.  Provided the oil CAN be collected, looks like the technology is already here to process it and make it usable. Getting the oil out of the water?  That may be the biggest hurdle yet, presuming they can stop the leak.

As for the politicians?  Why aren’t they busy writing new laws to create and support a sea change for our energy policies?  We have the talent, but we don’t seem to have the will to go for something totally new and possibly awesome.  Here are just a few of the alternative, CLEAN  energy sources we COULD be ramping up:

Not all of these energy sources will power transportation — but some of them can (such as the last two.)   Creating new power sources will create new and retooled manufacturing initiatives:  cars, planes, and trains that run on the new fuels; power plants; engines and coolers and heaters and more.  Those new manufacturing industries can power a whole new future for the world, and employ more than enough people to get our economy moving ahead at full steam.  (I deliberately left off nuclear energy, because it’s not clean.)

Yes I do understand how serious the situation is in the Gulf of Mexico:  I’m not dismissing the enormity of it.  And I also understand that we need a vision bigger than the problem is.  Like I said, maybe I’m dreaming here.  But someone has to.  Let the vision begin, wherever it can.  And let those with the solutions find eager ears to hear them — and act on them.  Invest in them.  I hope we as a society are ready for that now.  If we aren’t, we’d best change that.  Fast.