We were up at ringside early today to watch the Junior Handlers (kids learning how to show dogs.)    Boys in suit and ties, girls in dresses.  All very serious and earnest.  Great fun.  They did a great job!  For the adults, coffee (for me, tea) — and a small bite to eat.

Betony is at my feet under the booth (so far not bugging me about food — but that won’t last long) — and now I have TWO puppies next to me, both sleeping at the moment.  The sleeping won’t last long either. . .

Now after the earlier classes, they are judging Open Dogs.  This is for male dogs that have not yet gathered the points needed to become a Champion.

Dogs need at least 30 points to become a Champion — obtained from multiple shows and judges, including two majors (which means shows with a large number of dogs; the number varies from year to year and from breed to breed, according to how many litters of that breed that are registered with the AKC each year.) 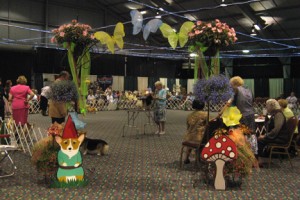 The theme for the show was A Corgi Fantasy. Photo by Cindy Read

What is judged in the conformation ring are the structure, movement, coat, and condition of the dog.  In our breed, there can be a variety of coat colors:

One of the values of breed specialty shows is that the judges are all owner-breeders who know what the breed should look like.  Their opinions carry more “weight” than all-breed judges, who usually have many different breeds to judge.  That’s why most breeders love to show at specialty shows; they know the opinions of the judges’ selections are valuable.

I’ll be back later, with news about the bitch classes, coming up next.