Yesterday the U Conn women’s basketball team‘s winning streak led them to their 89th consecutive win — impressive by any standards.  But the record they broke was set by the UCLA Bruins — a men’s Top 10-ranked basketball team.  And that was some years back!

I will let you in on a little-known factoid:  I was a high-school jock!  I played on the varsity women’s basketball team in my little town in Iowa — where women’s basketball was then (and still is) a Very Big Deal.  Many towns did not even have men’s sports — because the guys would all be out working on the farms.  The girls were the only family members available for high school sports, except in the bigger towns and cities.

The town where I lived and played basketball was very small (numbering in the 100’s, not 1000’s) and we played in a very minor league.  The “team to beat” each year was Holstein.  (Yes they have Holstein cows there, but also Guernseys and Jerseys; it was a big dairy area at the time.)  The Holstein girls were very tall — many of Swedish ancestry, and they were quite athletic.  My claim to fame was being able to out-jump them at the toss-up; because I was a bit shorter than they were, they didn’t expect to have to jump far and I took advantage of it and surprised them — as well as stealing the ball a few times.  But we never won against them.  I think we gave them a good game a few times, though 🙂 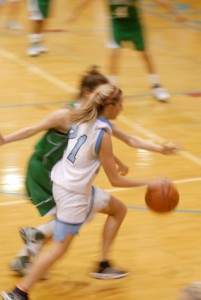 Women's basketball is a great sport for girls. Photo by groveb

But that didn’t explain the sheer zeal that Iowans held for the women’s teams.  There are absolute fanatics there still!  Even while I was in high school (and I’m not telling how many years now — but let’s just say that my team-mates now have grandkids LOL) — the quarter-finals through the championship games were televised throughout the state and most people sat glued to their screens watching while the games were on.  While I haven’t played in years, I still have the feel of the sport in my blood. Which is why I so love the U Conn team and their outstanding achievements on the court.

They are a disciplined, agile, well-trained team — a cohesive unit.  And I can tell you that there are NO plays that could happen on a basketball court that they have not rehearsed until it’s automatic; there is nothing you can do to or against them for which they are not prepared.

Frankly, I would match them against ANY men’s pro team and bet rather high odds they would win — or give the guys a helluva run for their money.  These athletes are truly in a class by themselves.  And what they have accomplished is nothing short of remarkable.

Kudos and cheers to the U Conn team and their coach.  I can’t wait to see how far they will go in setting new standards and records for the sport of basketball.  Watch out, guys — the U Conn women are putting you to shame!

See?  You never know what you’re going to find out when you read my blog!  Make sure you’re on my mailing list or rss feed to stay in the loop.

Oh, and if you’re a women’s basketball fan stop by and tell me what you love about it!