Thanks to an obsessively chewing kitty, this week I made a new flower essence formula for animals; Chewster! 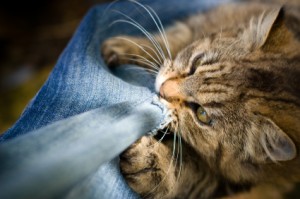 Obsessive Chewing Can Get You In Trouble! Photo by ill-tempered

It’s not just kittens and cats.  Puppies (and dogs) chew, too.  So do ferrets and rabbits and gerbils and . . . well, if it’s a mammal it probably teeths — and chews.

For one thing, all babies put things into their mouths; it’s one way they learn about their world.  For another thing, all babies go through a teething stage — which makes them want to bite and chew upon whatever they can get their little (sharp!!) teeth around.  It helps the teeth come into their gums better, and helps relieve the pain and tension from the teething process.  You don’t want to stop the chewing altogether, but you also may prefer that your best shoes, gloves, jeans (and yes — electrical cords!) not be the target.

For those wary pet owners who want to prevent tragic results in future, here are some guidelines:

I have a true story to tell about obsessive chewing.  One of my favorite cats of all time was a feral kitten rescued just after birth when we discovered its mother had begun killing the kittens she had just birthed.  We successfully bottle-fed him and he became an adored and reliable housecat, but. . . probably because he never had the chance to nurse as a kitten, he had an obsession with wool articles of clothing.  He would gather a bit of fabric into his mouth and suck on it, kneading the rest of the garment carefully while purring.  Surely a regressive behavior, but one we could hardly begrudge him.  We ended up “donating” one of his favorite sweaters to the cause — as a giveaway item.  Thankfully this was satisfactory to him 🙂

Some obsessions you can train away, and others you learn to accommodate.  I wish we had had the Chewster formula then, though.

If you or someone you know has a problem with pet chewing, get them a bottle of Chewster — or send them to this post and let them learn about better options for handling it.