What Business Are You In?

This is a story about knowing what you really have to offer, and what a difference it makes when you do.

A few years back, we were traveling along the Northeast corridor on the Interstate, en route to visit relatives.  Now, I don’t know about all Interstates, but this one has no “real” service stations, only pumps to get gas and maybe some oil, clean the windshield, etc. — no mechanics or repair services are available.

When we pulled in to gas up, as we turned off the engine we noticed that there was smoke coming out from under the hood.  Now, while we may not be the world’s most knowledgeable people about cars, we do know that this is not a good thing! 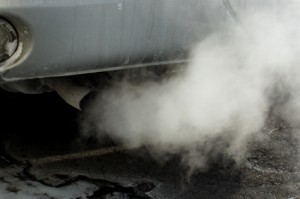 We asked the man who came to pump the gas to look under the hood and see if he could tell where the smoke is coming from, and if he could see anything that might indicate the nature of the problem.  This is a guy who looked to be, oh, in the neighborhood of 60’s or even 70’s, a little gruff around the edges, and maybe none too bright either.   (No offense to the older gents — just describing THIS one. . . )

So he opened the hood, gave a quick look around, closed it right up again and came and said, “Looks beeeeeeyooooooooti-ful!  Everything is fine there!  Maybe you just got something from the road on your exhaust pipe or something, don’t worry.”

Meanwhile, we could still see a small amount of smoke coming out from under the hood.  Hmmmmm.  What are we to think/do here?  Instant cognitive dissonance in play!   (Don’t worry?  HA!  Easy for him to say!)

Intrepid souls that we are, we decided to drive on, and see whether the situation got worse or if it improved.  As it happened, no more
smoke continued, and none of the gauges were showing anything out of the ordinary, so we relaxed.  A little.  But it stayed in the back of
our minds, and made the rest of the trip a little more tense than usual, worrying over whether something is going wrong that we should
pay attention to.

After another hour on the road, our discomfort factor got the best of us, and we took a slight detour into a large town where we were
pretty sure we could find a service station with “real” mechanics to look at it.  Soon we found one, and a mechanic opened the hood to have a look.

He said that it appeared that there might be a slight oil leak that had sprayed onto the exhaust pipe, causing some smoke and a slight
smell, but that he didn’t see anything serious and that we could certainly drive the rest of the way to our destination without any
danger (either to the car or ourselves).

OK, now the “expert” has spoken.  We felt somewhat reassured.  But the situation still had us worried.  What if???  We ran down all the
possibilities, and the topic consumed the rest of the trip.

When we reached our destination, we spent a lovely time with relatives, and more or less put the car situation out of the focus of
our attention for the weekend.  However, when it was time to get back on the road and return home, we looked at each other and said almost in unison, “So.  What do you think? Shall we go to the service station first?”  And laughed.  A no-brainer!

We went to the same service station that our relatives had used for years, but when we pulled in, we didn’t tell them that.  For all
intents and purposes, we were just out-of-town travelers with a potential problem and needed help.

They took the car into the bay and put it up on the hydraulic lift. There was no waiting, and the process was quick and easy. By the way,
the station was neat, clean, orderly, with a heated waiting area, plenty of (mostly) healthy snacks, and magazines for sale.  We got
some hot drinks and waited to hear the “verdict” about the car.

It didn’t take long.  The mechanic/owner came out and asked, “OK, which one of you knows more about how cars work?”  We looked at each other and said simultaneously “You do!”  And laughed.  So we both went to see.

It turned out that there was a slight leak in two cam shafts, which indicated that they would probably need to be replaced.  The leak had
sprayed onto the exhaust pipe (just like the other mechanic told us), causing smoke and an odor.  He showed us exactly where the leak was, and explained everything in language we could understand.  He didn’t make us feel like idiots, rather took the time to make sure we
understood what was going on.

He told us that this was not a dangerous problem, and that we could easily return home.  He gave us a written estimate of what he thought
it would cost to repair the engine, and gave us two quarts of oil in case the leak caused us to run low on the road.  He told us to check
the oil about halfway home, just to be sure that it didn’t need more, and to take it into the shop when we got home.  He said to be sure to
give his estimate to the repair people, so that they would know we already had an idea about what it should cost.  We said we would, and
thanked him profusely for his help.

That’s when the magic happened.  He turned to us with a sincere and warm smile and said, “Hey, no problem at all!  I’m in the business of
giving my customers peace of mind!”

I wanted to ask him who his coach is, because he really nailed it perfectly.  He KNOWS what he has to offer, and how much it matters to
people.  He is really clear about it, and it shows in everything he does.  I will never forget this, because it has totally transformed
the way I think about what I do.  I would add that this was one of the best demonstrations I ever had of truly quality customer service.

Now, I ask people, “What business are YOU in?” and I wait to hear if they really know the answer to that question.  Do you?