How to Build a Feral Cat Shelter: Part Fifteen

This article is Part Fifteen of a 15-Part Article on How to Build a Feral Cat Shelter.  This is the final installment, and the conclusion to the story of Old Guy.  It’s been quite a journey!   You can read previous installmentss in this series here:

The winter of 2012-2013 was very harsh, with long stretches of sub-zero weather and many storms.  On more than one occasion we had to shovel out a path through the snow to leave food for Old Guy, and to make sure he could safely get out of his shelter when he wanted to.  We noticed that on the coldest and worst days, he spent most of his time hunkered down in the shelter.  That made us so glad we’d built it!  He surely would not have survived a winter like this on his own, even if he had somehow found places to hide and wait out the storms. 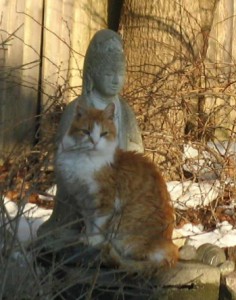 As Spring arrived, and with it new life, we observed that gradually Old Guy was declining in health and stamina.  He began to show signs of arthritic pain, and by the end of April, he could only sit slowly, stopping halfway down in obvious pain.  Our hearts were touched by the fact that, on some days, he would come to the back porch and cry just to have some contact with us even if he wouldn’t eat the food we left.  He had lost quite a few teeth, which made eating difficult, and some days didn’t eat even half of the small portions we left for him.   His eyes were often runny and matted, probably from some kind of infection, and we saw that he was having some new mobility and vision challenges.

Clearly, he was not doing well.  Because he would not allow us to touch him, there was nothing we could do for him except to offer food and clean water several times a day.  But by the end of April, new signs of decline showed up.  He began lurching rather than walking; some kind of neurological impairment now gave him new ways to suffer.  His eyes were no longer able to focus; he was going blind.   We were worried that he might have rabies, and wondered what we would do if it got worse.  We felt more and more helpless to be able to care for him, and knew that the end was approaching for Old Guy.

The shelter we’d made for him just wasn’t working any more.    His mobility challenges made getting into the shelter an impossible task for him, even though he no doubt wanted to use it.  After a couple of heavy rainstorms, Old Guy came to the back steps sopping wet and covered in mud.  It broke our hearts to see him like that!

We figured out a way to make him a different kind of shelter from the rain, which wasn’t perfect but that would keep him more dry than he was able to be when he was  under a bush somewhere.  We set up a wooden box on the back porch, turned on its side with several inches of clean straw on the bottom for a soft place to sleep and for shelter from the rains.

Because we had planned a trip to visit family in the middle of May and would not be there to care for him for quite a few days we knew that something had to be done.  But how?  We carefully planned a way to trap him, so that we could take him to Animal Specialty Center, where we knew that they would give him a gentle and compassionate end to his suffering.  We couldn’t heal him, but we could give him a final, gentle release and kindness as a farewell.

On the day we planned to trap him, we discovered that we had underestimated his ability to escape; he found a way out and was able to free himself.  A second attempt failed as well.  The instincts for survival are very strong in feral animals!   But even though we’d spooked him, he still came back to the porch seeking food and contact every day, albeit a little more wary than usual.

But on the 3rd day, we positioned an empty dog crate (medium size) opposite the temporary shelter we’d made after we saw that he was no longer able to get inside the winter shelter.   This actually worked in our favor, at the end.

Early in the morning, Cindy put a small bit of smelly herring right in front of the opening to the dog crate.  Old Guy had been sleeping in the box, and smelled the food.  He lurched toward the food and tumbled headfirst into the crate instead!  We had our miracle, and the opportunity we were hoping for.  He didn’t struggle much, nor complain, as we carried the crate to the car for transport to his final destination and release from pain and suffering.

As we expected, the staff at ASC were kind and compassionate both with us and with Old Guy.  Because of the length of time that his symptoms first appeared, they felt it unlikely that he had rabies (which was definitely a relief for us) but agreed that he had many health issues and that we were giving him a gift of kindness to end his suffering in a painless way.  The vet at ASC told us that for feral cats that have never been handled before, the usual procedures are to give them a strong intramuscular sedative to relax them completely before they do the final steps of painless euthanasia.  That sounded perfect for Old Guy; he wouldn’t be subjected to anything more stressful, which is how we wanted it for him.  We made the arrangements and bid him a final farewell, with blessings for his journey in the hereafter.

While we knew it was the right thing to do, we were very sad that this is how it ended.  We’d hoped he would have more time with us, perhaps a few more winters and summers.  He was a very polite cat, for a feral.  He had his boundaries, and we honored them.   While our relationship with Old Guy was at a physical distance, still he blessed us with his charm and sweetness in his quiet presence.

He didn’t ask for much, but we were glad to help him have as comfortable of a life as he could, since he chose us and our home.  I’d told Cindy when he first came to our yard that I felt he’ d come here to die.  Little did I know then how true that would be!  It was just a hunch.  Turns out I was right.  We’re just so glad that we were able to give him a soft landing for his final moments on this earth.

We miss Old Guy every day.  We hadn’t known that a creature who kept his distance could get into our hearts so easily, and stay there for so long.  But he did.

This story began as an instruction guide for how to build a feral cat shelter, but quite unexpectedly it became more than that.  I hope that this story touches your heart, too, and helps you find your own way to create more solutions for the feral cats who live near you.   It’s not their fault that they don’t have homes.   Some of them truly belong in the wild.  If you can catch them, get them spayed and neutered, so they don’t reproduce.  Give them shelter, if you can.

But don’t be surprised if the cats that you help find their way to your heart, too!  They are all worthy of your love and care.