How to Build A Feral Cat Shelter: Part One

This article is Part One of a 15-Part Series on How to Build a Feral Cat Shelter.  Since this is the first time we’d made a shelter, it’s perfect for newbies.  (And there’s a story inside, too!)

There was an older feral cat who seemed to have adopted our back yard as his sanctuary.  He looked to be the sire of some of the younger, more aggressive young toms around the neighborhood, and we thought he may have been pushed out of his previous territory by the younger guys.   Whatever the cause, he was welcome here, as he was very polite for a feral cat.   He WAS not very good at chasing squirrels and he didn’t bother the birds, so he had no behaviors that troubled us.  Other cats occasionally came into the yard and challenged him, but we scolded them away by saying “No fighting here!”  (Seems to work, oddly enough.)

Because we weren’t sure where he went at night for shelter, and because the winter weather was turning very cold at night, we worried that he might need more than just a pile of leaves to hunker down in.  While we had never made an outdoor cat shelter before, we did go online to look at some of the instructions and plans that others suggest at some of the feral cat sites.  While they were helpful, we ended up making a custom version that really worked well.

Our process is what I will be sharing here in this article.  Hopefully, it will give you some good ideas about how to create your own custom-built  feral cat shelter.

First of all, here’s the cat that inspired all this work.  He may have a name, or not.  We just called him Old Guy.  The first picture is of him sleeping near the Quan Yin statue in the yard last summer. 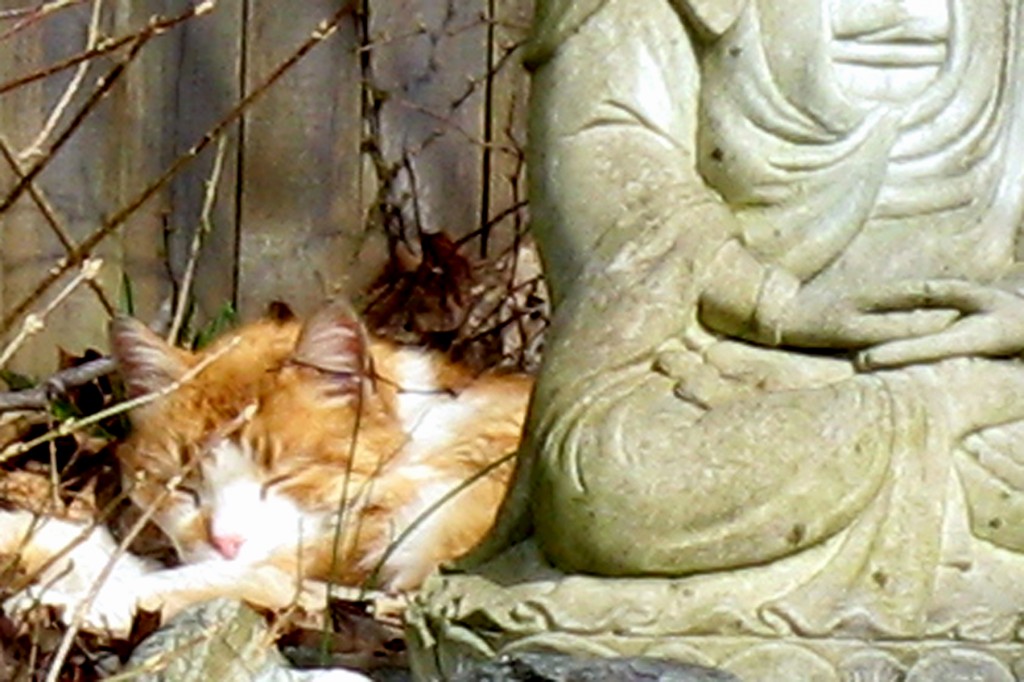 When our old dog, a Pembroke Welsh Corgi, was alive, Old Guy never seemed afraid of her.  We sometimes had to gently ask Old Guy to move off the porch so we could let Betony have a clear path to the yard when her eyesight began to fail; instead of running away, he would just move off the porch and watch silently, sitting quietly, tail primly curled around himself.

Our pet sitter told us that he surprised her one day by trying to get into the house, as if he was used to going inside a place where he’d never set foot before.  Clearly he felt some affinity with our space, and, for all we know, to our home and presence here.   He seemed to like us and related to us from a bit of a distance; kind of a platonic relationship filled with frequent “meeps” and loud mews when he was hungry.

So now you have kind of a vignette of who this feral cat was, this Old Guy for whom we decided to prepare a brand new, custom built dwelling.  The feral cat rescue sites have several kinds of tutorials for how to do this, but this was our first time at it, which is why I titled this article “for Newbies.”  If we could do it, I figure just about anyone could.

The instructions we found online (and selected as our model) were for a shelter intended for one cat’s use; if you have multiple feral cats who need shelters, each one should have its own private space, for health reasons, among others.  All the feral cat/rescue sites say the same thing about this.  In our case, multiple cats weren’t the issue, so we only focused on making this one shelter.

The basic concept is pretty simple:

Sounds easy, right?  Sort of.  It should be.  But it ended up with some unexpected challenges, that we eventually solved.  Here’s the story of how we made this thing happen, using those basic instructions as our guide.

First of all, we couldn’t find an 18 gallon storage tub when we went to buy one.  However, we did find one that was 24 gallons, slightly taller than an 18 gallon tub would have been.  We figured that would offer more insulation, which would be a good thing.  We bought that.

The next challenge was finding the right size styrofoam cooler.  The only one we could find anywhere did not have straight sides, and the top was much wider than the bottom.  We weren’t sure how comfortable this would be for the cat, or even if he could safely turn around inside it.  But since it was “the only game in town,” we decided to buy it and figure out the assembly part later on.

Finally, it was a little tricky finding the bedding straw.  None of the pet supply stores carry it, though they had plenty of bedding hay for hamsters and such.  The problem with hay is that it gets moldy and also attracts bugs, neither of which will work in an outdoor environment.  Straw is really the only thing recommended, and we were determined not to use anything else.

We finally lucked out with a local nursery, who sold it in bale-sized bags.  A really neat thing happened when we went to pay for it, too; when the clerk learned the reason we were buying it, she said. “Oh we love animals too!  We’ll give you 50% off since you’re using it to make a cat shelter.” How wonderful that was to hear (not that the straw was all that expensive, just to learn that other people want to help, too.)

So now we had all the pieces, the next step was the assembly process.  Despite assembling a fair number of pieces of Ikea furniture, we found that making something like this from scratch requires that one think outside the box.  Sorry about the pun, but it’s true!

In the next installment in this series, we will cover how this process went, with pictures for most steps.  Be sure to click through to each part of this article so that you get the whole story!  You’ll also want to read to the end, to learn what happened with Old Guy.  Here’s a link to Part Two.