Betony and the Buddha

It was a dark and stormy night.  We’ve been having a lot of those lately.  Our dog Betony’s hearing isn’t as good as it once was, which during thunderstorms is a blessing, because she can’t hear the thunderclaps unless they are REALLY loud — or right overhead.

Usually if we know a storm is coming, we give her flower essences to calm her; they work very well unless she gets spooked by a particularly loud thunderclap — or unless she’s feeling particularly vulnerable — which she has been ever since her last round in the ICU a few weeks ago, with hemorrhagic gastric enteritis and aspiration pneumonia (for the 3rd time, on that.)

This night, it was not only stormy but we were doing reiki healing sessions, so she got to have some good attention as well.  But after her healing, she was still kind of unsettled, looking around for a place to get comfy, when suddenly she headed directly to the Buddha that we have in the shrine room, nuzzled her head against its lap, and promptly fell into a deep sleep, snoring loudly.

It was such a sweet thing she did, that I asked Cindy to go see if she could capture it on film.  We weren’t sure if that was going to be possible, because often she hears the sounds of the stairs or the sound the camera makes as it’s being activated.  This time. . . we were in luck.  She stayed sound asleep.  And this is what we captured. 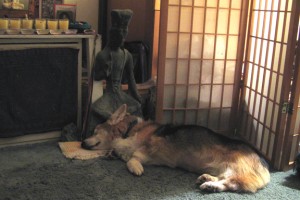 Betony and the Buddha

Sometimes all it takes is the right energy, the right spot — and “a little help from your friends” (in higher places.)

With all the turmoil in the markets, the economy, political unrest all over the world, and a few crazies popping up at random when you least expect it — it’s nice to know there is refuge available.  When even the dog knows that. . . it’s time to pay attention 🙂