Monday, May 17th was an event my family has been looking forward to for several years:  my niece’s graduation from Barnard College.  For my family, it was truly culture shock; my sister and brother-in-law are small-town-midwesterners, seldom venturing into urban environs.  Mary took me aside at the reception afterwards to say softly, “Nancy. . . do you realize that there are more people inside this auditorium than we have in our entire county??!?!!??” 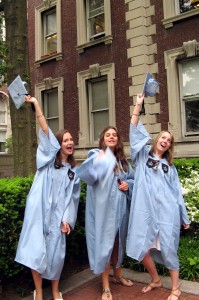 I had fun meeting Rachel’s friends, seeing the ceremony from a Jumbotron set up for extended family in one of the buildings, and listening to the student speeches.  I think for most everyone, one of the highlights was Meryl Streep’s address.  It was heartfelt and touching, perhaps beyond what I’d expected of her.  (Talk about an overachiever!)

Meryl said several things that were thought-provoking for me.  One was (and I’m paraphrasing here) that in her experience, the hardest job for an actor is to get heterosexual males to empathize with a female character’s point of view.  Empathy is not something that comes easily for males, and not something that is held as a deep cultural value in our (and many other) cultures — because historically, women have not been valued as highly as men.  I’d never considered this from the standpoint of an actor’s job before, but Streep said that she considers it one of her crowning achievements to learn that some of her roles have successfully caused heterosexual males to empathize with her character.  (Tough job but if anyone could do it, Streep can!)

Another area she covered briefly is the respect — real respect — for diversity.  She says that this can’t really be taught, it has to be experienced, and that she sees that colleges like Barnard offer that opportunity for women, and by extension, the men in their lives as they go out into the world as the leaders they have become.

As I watched the young women process to the podium to receive their degrees, I noticed how very diverse the graduates were.  Barnard President Debora Spar said that this year’s graduating class came from 40 different states and 19 countries; inside their pale blue robes were all the colors of the human palette, as well as a broad spectrum of orientation and interests. LBGT graduates were allowed to wear rainbow tassels on their mortarboards, something that would have been unheard of in the generations when I was in college some years back. Just about every ethnicity and culture was represented.

Clearly the college itself supports and fosters an atmosphere that not only welcomes diversity, but understands that this is how culture truly thrives and progresses.  Sometimes, to create change that lasts, you have to know and act as if it’s the right thing to do and be.  These graduates have that understanding well in hand.  There’s no big deal about any of it, whether it’s which country you’re from, or what your orientation or beliefs might be.

Watching all the impressive young women graduating — not the least of whom is my own niece! — I felt that the future of the world is in good hands.  These are confident, capable, intelligent, witty, and powerful women — just what the world needs these days.  Congratulations to ALL the graduates this year, from all colleges and universities.  The world needs your contributions, for a much brighter future.

The rest of us are eager to receive what you bring to the world.  Whatever it is that sings in your soul, go for it!